The newly released magnum opus Manikarnika: The Queen of Jhansi is heading decently on weekdays after an excellent weekend, but this is not enough for it to reach the safe side because of its whopping budget. Year’s first biggie doesn’t seem comfortable opposite to the highly-appreciated Uri The Surgical Strike. 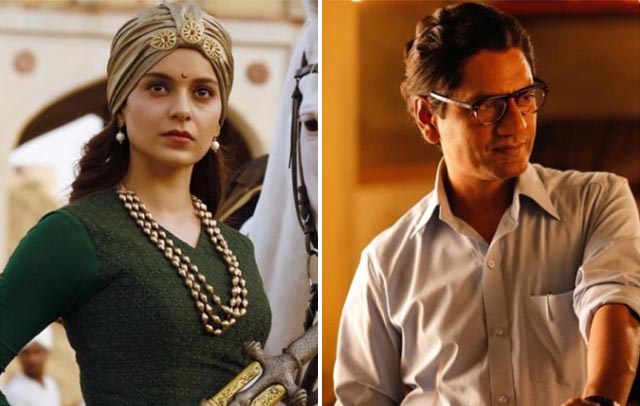 Starring Kangana Ranaut in the titular role, Manikarnika: The Queen of Jhansi took a decent start but picked up remarkably over the weekend and did the business of 42.55 crores at the domestic box office which included 8.75 crores on Friday, 18.10 crores on Saturday & 15.70 crores on Sunday.

Directed by Krish Jagarlamudi & Krish, the film is now running on weekdays and minted the amount of 5.10 crores on Monday after a significant drop in footfalls. On Tuesday, with a further decline, it managed to collect 4.75 crores and raised its 5 days total collection to 52.40 crores from 3000 screens across India including Hindi, Tamil & Telugu.

On the other hand, the biographical drama starring Nawazuddin Siddiqui, Thackeray was also opened decently and registered a good weekend with a major response from Maharashtra. It did the business of 22.90 crores in the opening weekend with 6 crores on Friday, 10 crores on Saturday & 6.90 crores on Sunday.

On Monday, Abhijit Panse’s directorial faced a drop of 51.67% than Friday and raked the business of 2.90 crores. On the next day i.e. Tuesday, Thackeray witnessed a further decline and collected 2.50 crores. With this, its 5 days total domestic collection has become 28.30 crores nationwide including Hindi & Marathi versions.