Like last year, this Independence Day too, superstar Akshay Kumar and John Abraham are opposite to each other at the box office. The two much-anticipated Hindi films of the year, Mission Mangal and Batla House are all set to hit theatres on Thursday amid huge buzz among the audience. 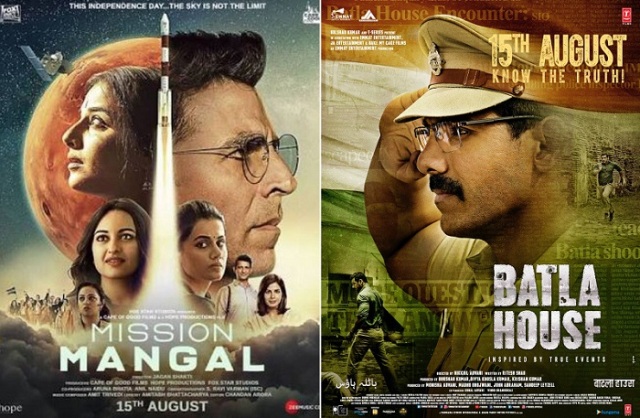 Reportedly, Fox Star Studios’ presentation has registered an excellent advance booking across the country majorly in metros and fortunately, the early reviews are very positive. On the first day, it is expected to take the biggest opening of Akshay’s career by collecting 26-27 crores, which is higher than his last Independence Day’s release Gold (25.25 crores).

On the other hand, Nikkhil Advani’s directorial Batla House is an action thriller inspired by 2008’s Batla House encounter case stars John Abraham, Mrunal Thakur, Ravi Kishan & Rajesh Sharma. The film has created a solid excitement among fans as well as the moviegoers by its trailer.

As per the reports, T-Series, Emmay Entertainment & JA Entertainment’s production has recorded a very good advance booking on single screens and expected to open in a range of 18-19 crores at the domestic box office. While last year, John Abraham’s Satyameva Jayate was opened at 20.52 crores.