Featuring Hrithik Roshan and Saif Ali Khan in the lead roles, the neo-noir action thriller Vikram Vedha has registered an overall average opening weekend at the box office after a slow start. While the Pan-India period action drama Ponniyin Selvan 1 (PS-1) has remained decent throughout the weekend with its Hindi version. 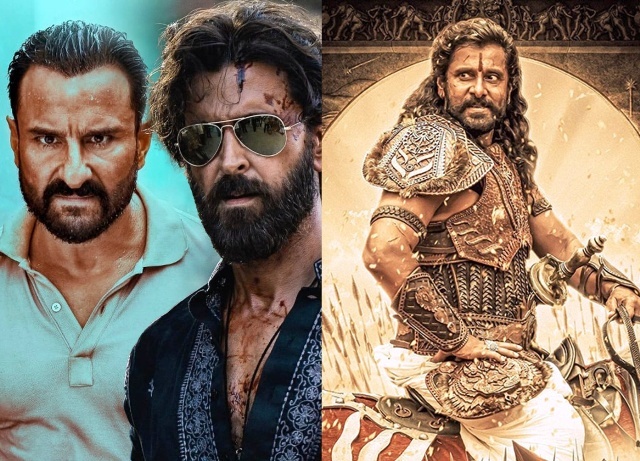 Directed by Pushkar-Gayathri, Vikram Vedha managed to create a solid impact on viewers and received favourable reactions due to its engaging storyline and terrific performances by the leading actors. Despite positive word of mouth, the film struggled to receive the desired response at the box office.

The official Hindi remake of the Tamil film with the same title, Vikram Vedha opened on a slow note on Friday and did a business of 10.58 crores. On Saturday, it showed a jump and minted 12.51 crores. With further growth on Sunday, the film bagged 13.85 crores and registered a 3-day total of 36.94 crores nett with 4007 screens nationwide.

Definitely, Vikram Vedha should have performed better at the box office considering its good pre-release hype and the solid stardom of Hrithik Roshan. Now the film has to hold well on Monday and remain steady afterwards to register a satisfactory first week.

In parallel, Ponniyin Selvan 1 directed by Mani Ratnam has also impressed many critics as well as the audience and reported tremendous business worldwide including all languages. With its Hindi version, the film opened on a decent note on Friday and collected an amount of 1.85 crore nett.

Due to positive word of mouth, PS-1 picked up well over the weekend and raked 2.50 crores on Saturday and 3.25 crores on Sunday. After 3 days, the film has registered a total collection of 7.60 crores nett in the Hindi circuits from around 1000 screens.