Hollywood’s latest offering, Spider-Man: No Way Home is making huge money at the Indian box office. After a stellar start on Thursday, it recorded a significant drop in business in the South due to a tough opponent Pushpa: The Rise but still managed to remain overall strong on Friday. Showing an uptrend, the Tom Holland starrer picked up the pace on Saturday. 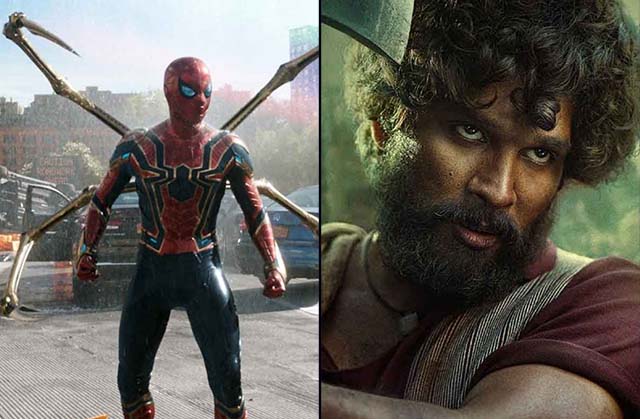 The third film in the Spider-Man franchise, Jon Watts’ directorial has impressed all the critics and getting wonderful from the audience in India due to the positive word of mouth. Spider-Man: No Way Home was hit the theatres on Thursday and registered a phenomenal opening business of 32.67 crores net with around 70% occupancy.

On Friday, Marvel Studios’ film witnessed a drop of 37.65% and minted an amount of 20.37 crores. On Saturday, Spider-Man: No Way Home showed a decent jump vis-a-vis Friday and bagged a business of 26.10 crores. With this, the film has increased its 3-day total collection to 79.14 crores net (100.84 crores gross) from 3264 screens including all versions.

On the other hand, Allu Arjun starrer Pushpa: The Rise which was released a day later on Friday, is ruling the box office in the South. Directed by Sukumar, this Telugu action crime drama has managed to create a solid impact on viewers and is giving a tough competition to Spider-Man: No Way Home at the box office there.

Other than the South Indian languages, Pushpa: The Rise has been released in Hindi also and the public response in the Hindi circuit is decent despite limited screening. On Friday, the Hindi version was opened at 3.31 crores which is higher than the opening numbers of KGF Hindi (2.10 crores).

Then on Saturday, Pushpa Hindi added an amount of 3.77 crores to its account and registered a total collection of 7.08 crores within 2 days. Across the country including all versions, Pushpa: The Rise has grossed approx. 77.50 crores in 2 days with 52.50 crores gross on Friday and 25 crores on Saturday.