Tom Holland, Zendaya, and Benedict Cumberbatch starrer much-awaited superhero film Spider-Man: No Way Home is enjoying a blockbuster run at the box office in India. After a phenomenal opening weekend, it is heading steadily on weekdays. Whereas the Hindi version of Allu Arjun’s Pushpa: The Rise is showing a solid trend in the North. 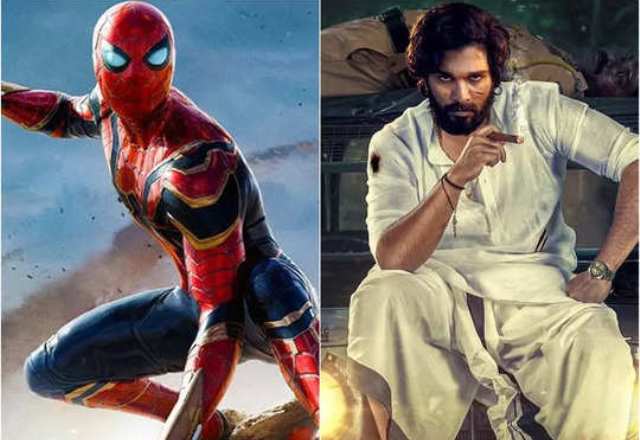 The 27th film in the Marvel Cinematic Universe, Spider-Man: No Way Home took a massive opening in India and registered a fantastic 4-day extended weekend with 108.37 crores net business which included 32.67 crores on Thursday, 20.37 crores on Friday, 26.10 crores on Saturday, and 29.23 crores on Sunday from 3264 screens.

Directed by Jon Watts, the 3rd film in the Spider-Man franchise entered the weekdays with a significant drop in business but still managed to score 12.10 crores on Monday and 10.40 crores on Tuesday. With the further decline, Spider-Man: No Way Home minted an amount of 8.70 crores on Tuesday and has registered a total of 139.57 crores net (177.91 crores gross) within 7 days.

In parallel, the much-awaited Telugu film Pushpa: The Rise starring Allu Arjun and Rashmika Mandanna is also shattering records at the box office. Not only in the Telugu states- Andhra Pradesh and Telangana, but in the North as well, the film is performing pretty well with its Hindi version.

At the opening weekend, the Hindi version of Sukumar’s directorial Pushpa: The Rise did a business of 12.62 crores with 3.31 crores on Friday, 3.77 crores on Saturday and 5.54 crores on Sunday. On weekdays, on a rock-solid note, it managed to collect 3.68 crores on Monday and 3.57 crores on Tuesday.

With a slight drop, Pushpa (Hindi) bagged an amount of 3.36 crores on Wednesday. With this, it has increased the 6-day total collection to 23.23 crores despite limited screening and low promotions.