The live-action adaptation of 1994’s animated film, The Lion King is reigning at the Indian box office since its release. Despite the release of a couple of new Hindi films along with holdover titles, it is still the first choice of viewers in metros and heading strongly in the second week. 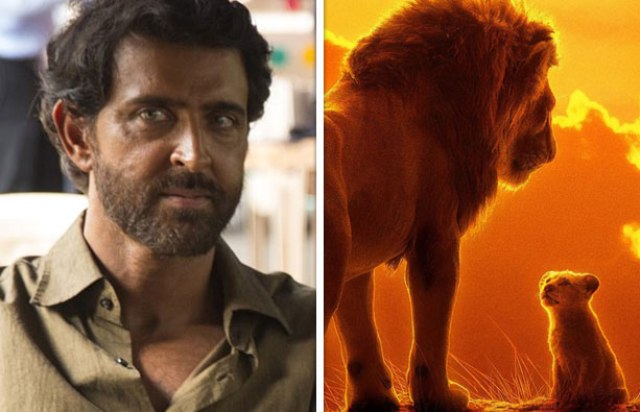 Directed by Jon Favreau, the fantasy adventure film has lived up to the expectations and gathered a good word of mouth. As a result, it did the business of 81.57 crores in the first week. In the second weekend as well, it had maintained a strong pace and collected 32.70 crores with 5.35 crores on Friday, 12.22 crores on Saturday & 15.13 crores on Sunday.

Presented by Walt Disney Studios, The Lion King is now running on weekdays and still has a solid hold over the Indian audience. On 2nd Monday, it had bagged the amount of 3.30 crores, while collected 3.05 crores on 2nd Tuesday. On the next day i.e. 2nd Wednesday, it has minted 3 crores and raised 13 days total collection to 123.62 crores nett.

In parallel, Hrithik Roshan and Mrunal Thakur starrer Super 30 has impressed everyone and running steadily in its third week after the two successful weeks. In the third weekend, it did the business of 12.22 crores that included 2.14 crores on Friday, 4.47 crores on Saturday & 5.61 crores on Sunday.

On weekdays, Vikas Bahl’s directorial biographical drama has recorded a normal drop and minted the amount of 1.39 crore on 3rd Monday & 1.35 crore on 3rd Tuesday. With a slight jump, Super 30 bagged the amount of 1.47 crore and raised 20 days total collection to 130.14 crores nett including 113.71 crores from the last 2 weeks.