After a fantastic first week, Walt Disney Studios’ presentation The Lion King has passed its second week also at a strong note despite a couple of new Hindi films in the parallel along with the holdover titles. Hrithik Roshan and Mrunal Thakur starrer Super 30 also showed a solid performance in its third week. 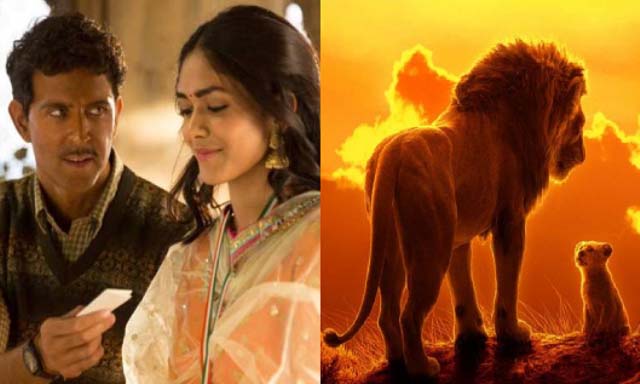 Directed by Jon Favreau, the live-action adaptation of 1994’s animated film is getting a wonderful response from the Indian audience. In the first week, it did the business of 81.57 crores while in the second weekend also, it maintained a solid pace and collected 32.70 crores with 5.35 crores on Friday, 12.22 crores on Saturday & 15.13 crores on Sunday.

Then on weekdays, The Lion King had recorded a normal drop in footfalls and minted the amount of 3.58 crores on 2nd Monday, 3.31 crores on 2nd Tuesday & 3.15 crores on 2nd Wednesday. On the next day i.e. 2nd Thursday, it managed to collect 3.01 crores and raised its 2 weeks total collection to 127.32 crores nett including all the versions.

On the other hand, Vikas Bahl’s directorial the Hindi biographical drama Super 30 has received much appreciation from the viewers and did the business of 75.85 crores in the first week & 37.86 crores in the second week. In the third weekend also, it had remained strong and raked 12.22 crores that included 2.14 crores on Friday, 4.47 crores on Saturday & 5.61 crores on Sunday.

On weekdays, Patna based mathematician Anand Kumar’s biopic had witnessed a normal drop and bagged the amount of 1.39 crore on 3rd Monday, 1.35 crore on 3rd Tuesday & 1.47 crores on 3rd Wednesday. At a similar note, Super 30 garnered 1.51 crores on 3rd Thursday and raised its 3 weeks total collection to 131.65 crores nett.