The highly-buzzed Hollywood offering The Lion King continues to dominate Hindi films at the Indian box office even in its second week. After a fantastic opening week, the fantasy adventure has started the second weekend at a strong note. The existing one Super 30 is also showing steady performance in its third weekend. 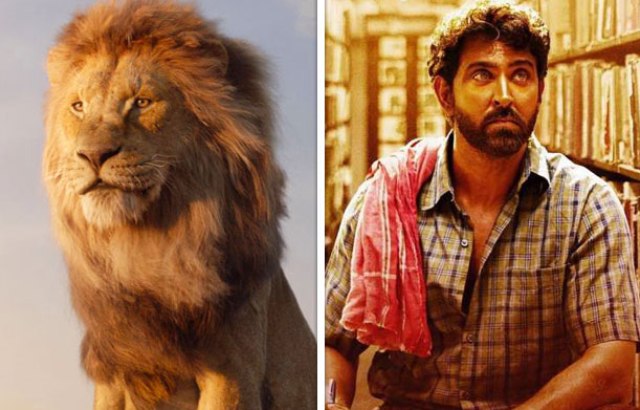 Presented the Walt Disney Studios, the live-action adaptation of 1994’s animated film has expectedly gathered a positive word of mouth in India and did the business of 81.57 crores nett in the first week that included 54.75 crores in the weekend and 26.82 crores on weekdays.

On 2nd Friday, The Lion King had recorded a normal drop in footfalls and bagged the amount of 5.35 crores. On the next day i.e. 2nd Saturday, with a remarkable jump, it managed to collect 12.22 crores and raised its 9 days total collection to 98.14 crores nett at the Indian box office.

On the other hand, Hrithik Roshan and Mrunal Thakur starrer biographical drama Super 30 has got succeed to impress many in theatres and gained a solid word of mouth. As a result, it raked the business of 75.85 crores in the first and 37.86 crores in the second week.

On 3rd Friday, with a normal decline, Reliance Entertainment & PVR Pictures’ presentation did the business of 2.14 crores. Then on 3rd Saturday, it took a healthy jump and scored 4.47 crores on board. After 16 days, the total collection of Super 30 has become 120.32 crores nett.