After an excellent opening week, the adventure comedy Total Dhamaal has passed its second weekend as well on a solid note despite the release of Luka Chuppi & Sonchiriya. Within 10 days, it has become the third highest grossing film of superstar Ajay Devgn by surpassing the lifetime total of his Golmaal 3 (107 crores). 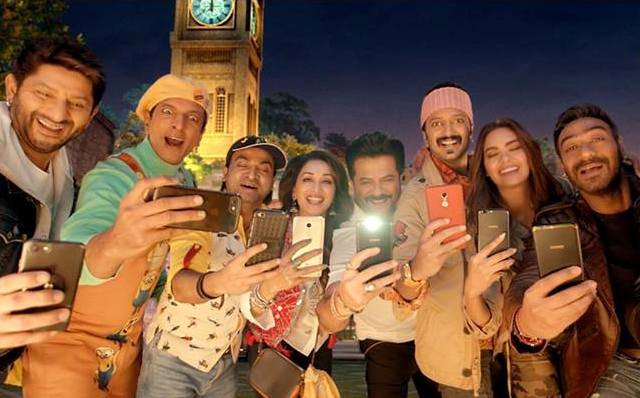 Directed by Indra Kumar, the third film of Dhamaal franchise has gathered mixed reviews from the critics but got succeed to entertain the audience across the country. Everyone liked the performance of the leading cast that includes Ajay, Anil Kapoor, Madhuri Dixit, Riteish Deshmukh, Arshad Warsi, Javed Jaffrey, Sanjay Mishra & Johnny Lever.

Total Dhamaal started its journey on a solid note last Friday and become the biggest opener of the franchise. By remaining strong throughout the first week, it did the business of 94.55 crores which included 62.40 crores in the weekend & 32.15 crores on weekdays from 3700 screens across India.

Fox Star Studios’ presentation is now running in the second week and picked up once again over the weekend. On 2nd Friday, it faced a drop of 26.92% vis-a-vis previous day and minted the amount of 4.75 crores. On 2nd Saturday, it took a fair jump and managed to collect 7.02 crores.

On the next day i.e. 2nd Sunday, with further growth, Total Dhamaal garnered the business of 11.45 crores and raised its 10 days total collection to 117.77 crores nett at the domestic box office. The film is expected to remain strong on its 2nd Monday as well because of Maha Shivratri holiday.