The third film from the Dhamaal franchise titled Total Dhamaal is all set to hit theatres this Friday amid good buzz among fans & the audience. The adventure comedy directed by Indra Kumar is one of the much-awaited films of the year and likely to take a solid opening at the domestic box office. 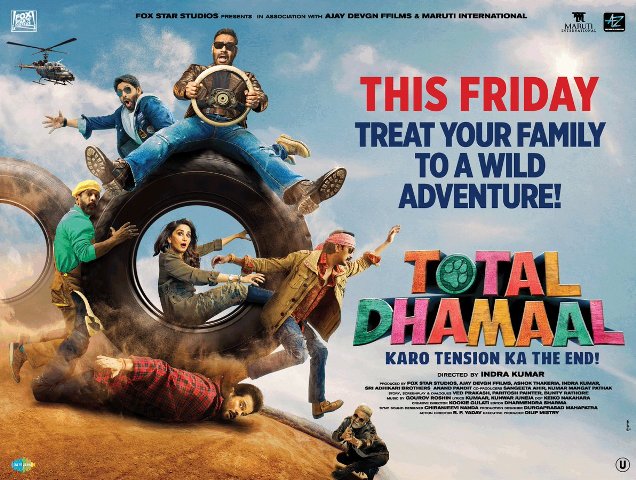 Starring superstar Ajay Devgn, Anil Kapoor, Madhuri Dixit, Riteish Deshmukh, Arshad Warsi, Javed Jaffrey, Sanjay Mishra & Johny Lever in pivotal roles, Total Dhamaal is the biggest film from the franchise so far in terms of star power as well as the budget. It brings Anil & Madhuri together on silver screen after 17 years. Also, the makers have left no stone unturned while promoting the film.

Looking at the previous records, then Dhamaal is one of the most successful comedy franchises in Bollywood and the stardom of superstar Ajay Devgn adds more power to its third instalment. Ajay’s last films Raid & Golmaal Again were huge successes at the box office, so one can expect the same for this one as well.

Total Dhamaal has recorded a good response at ticket windows for its advance booking in single as well as multi-screens cinemas across the country. So after considering all the reports & records, Fox Star Studios & Reliance Entertainment’s presentation seems capable to open in a range of 15-17 crores nett from around 3700 screens in India.

Produced by Ajay Devgn FFilms, Maruti International, Fox Star Studios, Pen India Limited & Mangal Murti Films, Total Dhamaal can be opened at a higher note if it gets succeed to hit the target right. Although some early reviews have mostly positive to say about the film.