Vicky Kaushal, Yami Gautam, Paresh Rawal & Mohit Raina starrer Uri The Surgical Strike is heading unaffectedly at the box office despite new offerings. The Hindi war drama is showing an exceptional trend and with every single day, it is increasing the possibility of it to join the 200-crore club. 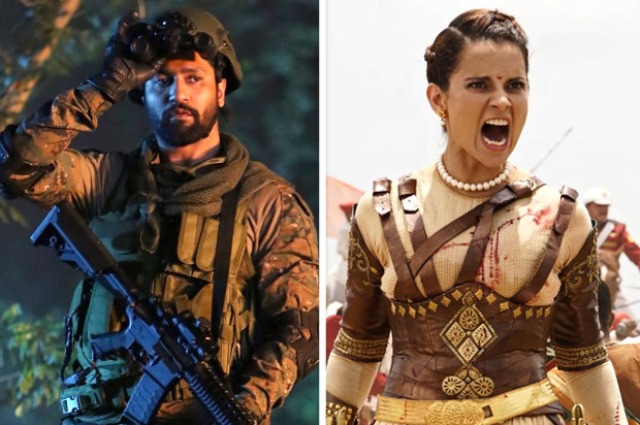 After the blockbuster 3 weeks, Aditya Dhar’s directorial entered in the fourth weekend on a solid note. On 4th Friday, it remained rock-steady as compared to the previous day and minted 3.44 crores. Then on 4th Saturday, the film showed a healthy jump and raked 6.62 crores. With this, its 23 days total collection has become 180.58 crores.

Produced by Ronnie Screwvala under the banner RSVP Movies, Uri The Surgical Strike is running phenomenally since its release. In the last 3 weeks, it did the business of 170.52 crores which included 70.94 crores in the first, 62.54 crores in the second & 37.04 crores in the third week at the domestic box office.

In parallel, the last week released Hindi period drama Manikarnika is also running with a maintained pace. Kangana Ranaut starrer has received almost positive reviews from the viewers and gathered a good word of mouth. In the opening week, it did the business of 61.15 crores with 42.55 crores in the weekend and 19.60 crores on weekdays.

On 2nd Friday, Krish & Kangana’s directorial witnessed a drop of 17.65% than the previous day and minted 3.50 crores. On 2nd Saturday, it took a noticeable jump and bagged 5.25 crores despite the new release Ek Ladki Ko Dekha Toh Aisa Laga. After 9 days, the total collection of Manikarnika has become 69.90 crores.