Vicky Kaushal, Yami Gautam, Paresh Rawal & Mohit Raina starrer Uri The Surgical Strike is about to complete a month at the box office and surprisingly still has a better hold than all the Hindi offerings released later. With an exceptional trend, the highly-appreciated film is likely to join the 200-crore club by the end of this week. 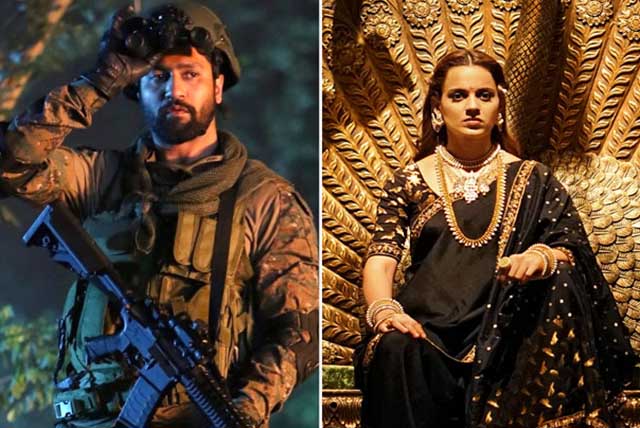 Directed by Aditya Dhar, the Hindi war drama did the business of 18.94 crores in the fourth weekend with 3.44 crores on Friday, 6.62 crores on Saturday & 8.88 crores on Sunday. Now on weekdays as well, it is heading steadily and minted the amount of 2.90 crores on 4th Monday & 2.67 crores on 4th Tuesday.

On the next day i.e. 4th Wednesday, RSVP Movies’ production Uri The Surgical Strike managed to collect the amount of 2.55 crores and raised its 27 days total collection to 197.58 crores nett including the business of 170.52 crores from the last 3 weeks at the domestic box office.

On the other hand, last week released Kangana Ranaut starrer Manikarnika is also heading steadily in its second week but on a lower note than Uri The Surgical Strike. In the second weekend, it did the business of 15.50 crores which included 3.50 crores on Friday, 5.25 crores on Saturday & 6.75 crores on Sunday.

On weekdays, after a normal drop in footfalls, Zee Studios’ presentation minted the amount of 2.25 crores on 2nd Monday & 2.05 crores on 2nd Tuesday. On the next day i.e. 2nd Wednesday, it managed to collect 1.85 crores and raised 13 days total collection to 82.80 crores including 61.15 crores of the first week.