After teasing with intense posters & powerful glimpses for a while, finally, the makers of much-awaited Hindi film Kesari have dropped its official trailer on the internet. Marks the first epic film of superstar Akshay Kumar, Kesari looks outstanding & truly impactful by the trailer. 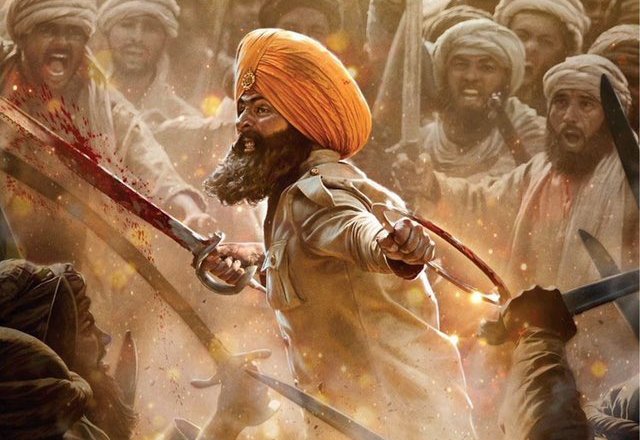 As per the announcement, trailer of Kesari was released at 11 am on Thursday, 21 February and is expectedly being liked by everyone. One cannot deny the fact, that it is one of the best trailers in recent times which has created a great impact on the viewers as well as the entire B-Town.

The trailer with a duration of over 3 minutes begins with Akshay Kumar as Havildar Ishar Singh standing at the battlefield with a sword & chakram in hands against thousands of Afghans who are heading to invade the fort of Saragarhi. Further, it shows the eye-widening highlights of war scenes & also the glimpse of Parineeti Chopra.

Everyone knows Akshay is a very dedicated & disciplined actor and this time his dedication is clearly visible through his role. The actor fondly known as Khiladi Kumar has performed many high-octane action sequences in the film which are coordinated by Oscar-winning Mad Max: Fury Road fame Lawrence Woodward.

Directed by the director of critically-acclaimed Punjabi film Punjab 1984 Anurag Singh, Kesari is based on the bravest battle ever fought in India, the battle of Saragarhi which was fought by 21 Sikh soldiers against 10,000 afghan invaders on 12 September 1897. Produced by Dharma Productions, Cape of Good Films, Azure Entertainment & Zee Studios, it is all set to hit the theatres this Holi on 21 March 2019.