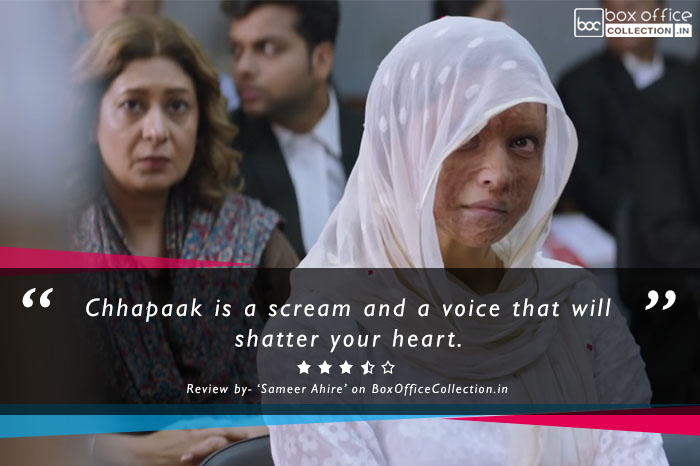 Chhapaak says so many things from its title itself if you see deep into it. If not then the trailer at least gave so much idea about how the film is going to be. An untold and unnoticed story of an acid attack victim Laxmi (real name) is told in Brilliant way by Director Meghna Gulzar and it’s a safe bet to shatter your heart (if you have one for the sake of humanity).

The first question comes on this story is why did this strong story remain unnoticed and untouched before? Ultimately that was good because it got into the safe hands of a genius storyteller like Meghna Gulzar otherwise someone else might have spoiled something here. Chhapaak tells a journey of a young Beautiful Malti (Laxmi’s character name in the film) who gets attacked by a relative with the Acid thrown on her face and then turning into Fighter Malti. The film also focuses on some judicial system problems in our country that how difficult is it to get the Justice and why we need to make some strict changes in our law.

Deepika Padukone as Malti delivers Best Performance of career till date. She is unstoppable from the first frame and remains unstoppable throughout the film. Many people had a fear that Vikrant Massey’s character might be sidelined in this woman-centric film but wait… We are here for the One Man Show by Vikrant Massey as he gets the best chance to shine as alone Male Lead Character in this Woman oriented drama. He gets to portray a big-hearted guy Amol and connects us all quickly. Supporting cast is fantastic whether it is important scenes or the chorus ones.

The story of Laxmi (Malti) is very painful and you might feel offended at several occasions or might scream out watching her pain. The film makes you feel her pain and that’s where the writer wins you over. The narrative looked brilliant, the screenplay is highly engaging with almost no loo breaks and the scripting is fantastic too. Music is highly situational that makes every scene more exclusive and impactful.

Especially “Chhapaak Title Song” is a slow poison that stays in mind even after leaving the theatre. Coming to the dialogues of the film, I mean one of the major winning aspects of the film for some valid reasons. Okay, this is a real story and you need some powerful hard-hitting dialogues that will poke hard to the criminal minds & some other faulty systems of our country and Chhapaak does it with excellence.

How many women directors we have to name in Bollywood when it comes to Quality films? I guess hardly few. Meghna Gulzar should now top the list of best women directors in India. Why? Look at her filmography, especially when it comes to real events she has managed to shatter some myths and delusions about cinematic compromises. Talvar, Raazi and now Chhapaak.. Have to believe that Meghna Gulzar is doing quality work consistently.

Overall, Chhapaak is a lesson and inspiration to the two repulsive sides of our society respectively where one has humanity and the other one has cruelty. However, the end of Malti’s story is predictable but then there is one more heart-wrenching scene in the last frame of the film which will force you to scream out. It’s not for weak hearted people because one needs to have strong guts to watch the film and feel it from the emotional quotient. Delivering perfect cinematic content Chhapaak might also change the life of Acid Attack victims and Normal people’s perception about them.