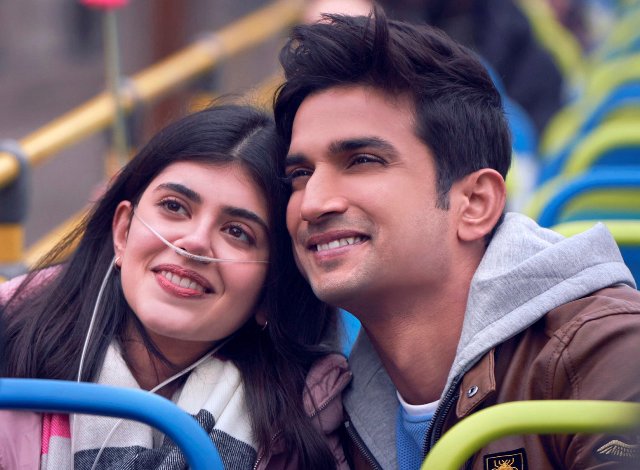 Dil Bechara is super hot in market because of the tragic death of it’s leading actor Sushant Singh Rajput. It wasn’t ever supposed to be so hot and in demand at first place when it was announced but destiny had some other plans. Anyways, Dil Bechara has successfully pulled out most of the mandatory elements from the original novel to make one verified good film for the Indian audience. It is funny, it is emotional, it is somewhat different in its own world and I guess these three things are enough to cover up the minuses.

Dil Bechara is about two cancer patients, Kizie Basu (Sanjana Sanghi) and Imanuel Rajkumar Jr (Sushant Singh Rajput) who falls in love but death finds it’s the way between this Romance. The basic idea is the same as The Fault In Our Stars novel but the screenwriting adds something different and something that has local humour. This attempt of the transformation of humour is successful at some level but not every time. The efforts to make it look original falters because it misses many nuances in characters, places, medical terms and cinematic conditions. Overall, it comes out better than what it should have been because the climax is very emotional and those emotions might just beat all those odds you witnessed before.

Sushant Singh Rajput had finally got the role he was looking for, the role which suits his potential but unfortunately, it became his last one. The best act of his career was MS Dhoni because the transformation and dedication for the real-life characters always overlap the fictional characters. Here in Dil Bechara, he got every variety like comedy, romance, drama and mimicry to try and he did everything so perfectly. Undoubtedly, this has to be the most vibrant and entertaining performance of his career.

Sanjana Sanghi looks cute and innocent and survives in all difficult scenes while she looked a little bit less confident but in a debut film this by far enough. Sahil Vaid, Swastika Mukherjee and Saswata Chatterjee are good in supporting roles while Saif Ali Khan totally nails in his cameo. The dialogues in Dil Bechara are emotional but lack the allegorical value. Cinematography is good, editing is fine and music is situational. The film lacks a solid hit number when the potential was there and if someone like AR Rahman is on board then this is definitely below par. But thankfully not a single song looked dull, nor looked like a thing to be skipped at least when the video was going on in the first watch.

Mukesh Chhabra has a lot to learn in direction but whatever he tried in his debut product is not completely lame. He missed some essential nuances and metaphors, he failed to cook some important scenes but he kept the most important portion intact. That emotional portion in the film is perfectly driven and may god bless Chhabra for that because without it the film would have ended as a lame attempt.

Overall, Dil Bechara adds something, misses something but it is saved and that’s important. A half-baked adaption loses the essence and misses the nuances but recovers because of powerful emotions surrounding Sushant Singh Rajput. Do watch it for Sushant not because it’s his last one but because this is the most vibrant performance of his career and perhaps the best one.