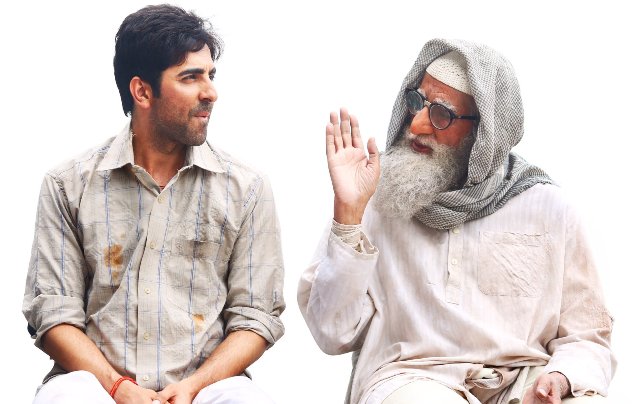 A confined and narrow topic gets a little funny treatment but couldn’t remove the mess somehow. Gulabo Sitabo is the same old topic about greed and excessive hunger hence making the narrative and ending very much predictable. However, it creates a little fun with the help of characters and situations. It goes on to touch cheap level sometimes but otherwise, it generates humorous laughter. There are plenty of loopholes in the plot around the characters and legal procedures which could have been handled with precautions but wasn’t helped.

Gulabo Sitabo tells a story of Mirza (Amitabh Bachchan) who has married an older woman for the sake an ancient mansion and one of his tenant Baankey (Ayushmann Khurrana) who is also looking for his share and opportunities to get something which never belonged to him. Later, the predictable conflicts such as politics, legal actions and archaeology department’s interest make a solid mess. This mess somehow is enjoyable at some level.

Gulabo Sitabo begins on a slow note wasting so much time on the introduction of the characters and after spending almost 40 minutes on that the real fun begins. But the treatment given towards the end is not up to the mark considering the potential of the subject.

Ayushmann Khurrana as Baankey is strictly decent. His accent works very well but only if you are familiar with Lucknow’s traditions. Amitabh Bachchan as Mirza is fantastic and undoubtedly the best performer among the cast. Vijay Raaz, Brijendra Kala and rest of the supporting cast does a fine job. Music is too dark and therefore looks dull despite the fact that it was highly situational. Dialogues and cinematography are okay.

Shoojit Sircar gets the conviction right but somehow his storytelling is outdated and typical. Also, Gulabo Sitabo has plenty of loopholes in the story, characters and screenplay. Some characters behave so dumbly and that too without any reason or clarification. The legal events too don’t make much sense. Shoojit Sircar could have worked on these shortcomings and Gulabo Sitabo would have definitely become a must-watch product.

For now, it is a good film and one-time watchable thing which could have easily come from any ordinary Bollywood director with the ordinary cast. Ayushmann Khurrana continues his chain of good films but the level of standard is one down this time.