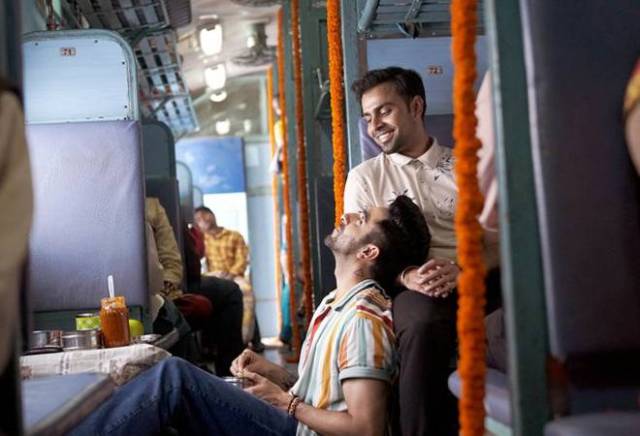 Shubh Mangal Zyada Saavdhan caught attention from the trailer itself and left us wondering over its concept. There had been so much talk about the film’s concept from both the sides like negative and positive, therefore final product was awaited for those reasons as well. Without any further delay, I can say the final product is a success whether it is entertainment quote or social message. Ayushmann Khurrana delivers another winner, another hit film in his kitty.

The film is not a sequel to Shubh Mangal Saavdhan at all and it’s very much clear to all of us. This is about same-sex marriage and society’s mindset on an awkward topic like homosexuality. Kartik (Ayushmann Khurrana) and Aman (Jitendra Kumar) are in love and wants to get married but will their families and society accept them? What happens when the typical family of Aman Tripathi come to realise about Kartik-Aman relationship, how they battle against all odds is all about the script.

Coming to the acting of Ayushmann Khurrana, this guy is just ruling every genre and getting better with every film. Here, he plays a gay but never makes it look lusty or too awkward. Kartik (his character name in the film) has his own swag and he’s always ready to tackle any difficulties. Jitendra Kumar as his partner Aman Tripathi looks confident and vulnerable.

What I liked the most about this film is it’s supporting cast. There is a family, there’s a chaos and every member of the family gets involved in all important scenes and laughter. Neena Gupta is fearless like never before and Gajraj Rao supports her in hubby-wife chemistry with simplicity. Pankhudi Awasthi looks so gorgeous and cute in every frame despite being a sidelined character. Characterisation of Manu Rishi Chaddha (Chaman) and Maanvi Gagroo (Goggle) is so freaking hilarious already.

The film is also blessed with impeccable writing skills and uniqueness in the content. Giving major role and heavy dialogues to supporting cast was a risk but it has worked big time. It is one of those rare films where people will remember the supporting cast of the film. Tanishk Bagchi also doesn’t disappoint at all, even though he fails to deliver a massy chartbuster he doesn’t fail to give situationally enjoyable songs. Two remake songs have got solid videos to please your eyes whereas fresh songs like ‘Gabru’ and ‘Oo La Laa’ are pleasing to ears. I won’t forget to give a special mention to dialogues which are there in the film to make you laugh out loud for sure.

Writing of Hitesh Kewalya overtakes his direction in this race. This powerful writing could have got little better with a couple of more dramatic and impressive scenes and that was the director’s job. Nevertheless, he has a certain winner product in hand and there is nothing much for bashing. If you’re trying to make a sense then you should make it in a likeable way and that’s where Shubh Mangal Zyada Saavdhan wins you over with its hilarious story-telling.

Shubh Mangal Zyada Saavdhan makes a rare combo of an urban topic and single screen humour. This subject with sensitivity might have gone favourable only and only for the multiplex audience but Hitesh Kewalya moulds it into massy situational comedy. I hope this trick will help film’s content to reach to pan India audience and the importance of the subject gets noticed by people. Overall, Shubh Mangal Zyada Saavdhan has it all what you seek from any family entertainer along with enough dose of social message. Go and catch this fun ride in your nearest theatres.