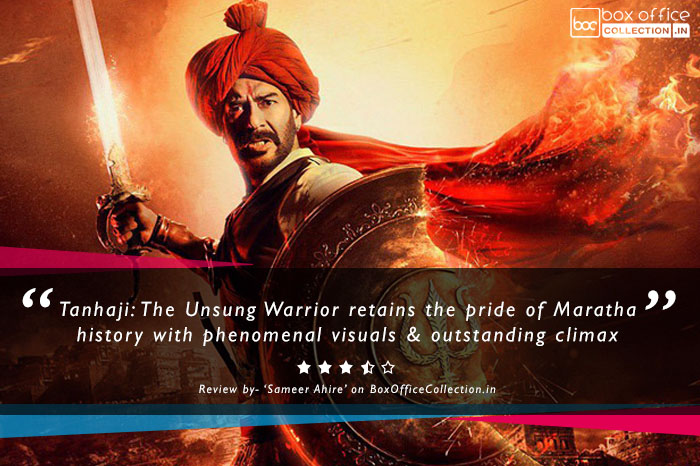 Tanhaji: The Unsung Warrior had a fabulous trailer that suddenly awakened and increased our expectations in the last 2 months. Usually, it becomes tough for the film to match the scenario when expectations are already high and then even a good product looks average, thank God it doesn’t happen with the Tanahji. Blockbuster writing, awesome performances, great Cinematic presentation, high-class 3D Visuals and clap worthy climax makes Tanhaji a worth watching a historical drama.

In the late 17th century, the Mughal Emperor Aurangzeb (Luke Kenny) declares strategic hill fortress Kondhana as the Mughal base of Southern India from which he planned to expand the Mughal empire into South India. However, The Maratha Emperor Chatrapati Shivaji Maharaj (Sharad Kelkar) wants to re-capture Kondhana at any cost to protect Southern India from Mughal invasion. Tanhaji convinces Chatrapati Shivaji to let him handle this campaign despite having a wedding ceremony of his son scheduled on the same day. On the other side, the Mughal emperor sends his trusted commander Uday Bhan (Saif Ali Khan) to defend the fortress, thus leading to a battle between the two armies for control of the fortress.

In the acting portfolio, Ajay Devgn as Tanhaji leads the ship here. He is an excellent actor already and gets everything right about the character on screen. This is perhaps his Best Performance and role among his recent films. Saif Ali Khan shows the evil face of the villain with intact cruelty, he could have been much better though. Kajol plays Tanhaji’s Wife Savitribai which has limited screen space. However, she looks perfect Maharashtrian traditional beauty. Sharad Kelkar while portraying a difficult and heavy character of Chatrapati Shivaji successfully carries the baggage of expectations. His expressions are too good. The supporting cast includes Devdatt Nage, Jagapathi Babu, Ajinkya Dev, Luke Kenny and Neha Sharma is highly impressive.

When it comes to the writing I would say the story of Tanhaji was Blockbuster material already. One just had to craft and present it very well which was not an easy task really but the screenplay, dialogues and narrative here do the difficult job easily. The film takes time in the first half to settle the plot and that was quite unexpected lose portion. The editor could have done better in the 130 minutes of runtime to make it more grippy.

Excluding songs and some lose portions, Tanhaji is Bahubali of Bollywood. Background score sounds better than Music of the film (a rare thing), especially “Ra ra ra… Ra ra ra” is a gem. After the slow first half, songs don’t really work and it feels like the film might end on the underwhelming note but then pacy 2nd half and outstanding climax force you to clap at the end. Visually, this is the best 3D experience in Bollywood. Technical and VFX team deserves loads of love for the gorgeous achievement on the big screen.

Director Om Raut had a big task in hand and that too in debut film with tremendous pressure yet delivers up to the mark. This is a big achievement when you have spent a lot of time on one project and have the pressure of fulfilling the hard work of 4 years. Surely he could be the next big thing coming in Bollywood because this Historic Period Drama genre is not handled well by others. Om Raut not only handled the high scale magnum opus perfectly but he also added some brilliant nuances in the storytelling. I wish people should notice those nuances and praise him for those genius moves.

In a nutshell, I would say Tanhaji The Unsung Warrior lives up to the hype and the expectations. Thank you so much to the director Om Raut and actor, producer Ajay Devgn for retaining the pride of Maratha history. The untold story of brave but unsung Tanhaji deserves to be told, deserves to be watched by people and it deserves to be showcased only and only in this kind of experience. Also, this is a great start to the “The Unsung Warrior” franchise and we wish many more to come. Go for it and have some breathtaking visual experience in 3D Format.