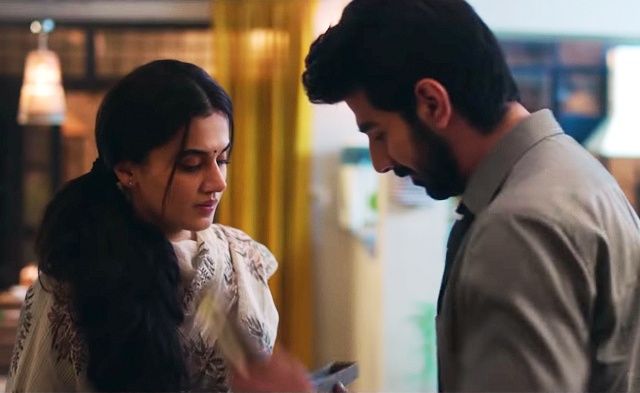 Thappad had a thought-provoking trailer if you remember there was something haunting in it. ‘Just a slap’ but still somewhere it didn’t feel like just a normal thing, why? Because maybe we want this thing to be showcased, especially women audience. Domestic violence is a general and neglected thing in our country (mostly in rural areas) which is not fair.

In our male-dominated society, these things were covered by almost every member of a family which sometimes gave birth to a big crisis in the life of married couples. Thappad comes out strongly to raise a voice against domestic violence or rather I would say against that Slap. This is just not about the one family or the hero-heroine pair but Thappad also has perfect time-space for other 5 women in the film who have different stories of their own.

Thappad is a story of Amrita (Taapsee Pannu) whose seemingly perfect life is shattered when her husband slaps her once in a party. But is one slap enough to question what a relationship stands for? Is it reasonable? Is it fair enough to ask for a divorce? It is just not about Amrita but also about every so-called happy couple in the film where a female side is always sacrificing it’s freedom, dreams and after all this, pretending to be happy. How rarely do we see such a topic in a Bollywood film?

Taapsee Pannu is doing quite good with her recent films where she is having a weightage role. She is not a typical heroine who gets overshadowed by a male actor in male-oriented films anymore. After ‘Saand Ki Aankh‘, Tapsee gets another strong role and this time its Solo, and she doesn’t fail to do full justice to it.

Pavail Gulati as her husband is so real and convincing that he looks cruel enough when he wants to and looks kind enough as well whenever needed. Entire female force in the film is fantastic in their minimal roles which include Tanvi Azmi, Ratna Pathak Shah, Dia Mirza, Naila Grewal and Maya Sarao. On the other side, male force compliments them which includes Kumud Mishra, Manav Kaul, Sushil Dahiya, Ankur Rathee etc.

Anubhav Sinha and Mrunmayee Lagoo try to explore and elaborate a very small topic into a 140 minutes feature film, in which I can say they have succeeded by a fair margin. The problem in the screenplay is, you have clear focus and stroke on the main content only for 10 minutes in the end because the soul of your story is small already while other 130 minutes literally test your patience.

This film needs your time so that you reach the right conclusion but you have to keep your interest alive till the end or else this might turn into an unbearable affair. Technically the film never gets too much cinematic, it is just so simple which can either impress you or make you feel bore. It all depends on your taste that what kind of food you’re expecting here. Music is fairly okay looking at the content of the film but a soulful hit song would have been a better option.

Looks like director Anubhav Sinha is trying to explore some never touched before topics since his evolution. ‘Mulk’, ‘Article 15’ and ‘Thappad’ all 3 films have a topic that is small but was never explored before, and he actually makes a hat-trick here. Expectations were high after critically acclaimed and commercial success ‘Article 15‘ therefore ‘Thappad’ had a burden of expectations to carry which it doesn’t overcome. Otherwise, Thappad has it’s own different world, different proportions where Anubhav Sinha scores too many rankings.

Team Thappad deserves Kudos for the attempt on the usual yet rare topic but cinematic and dramatic values are unexpectedly less. If you don’t expect heavy dramatic portions and will be happy with realism rather, then don’t forget to add Thappad in your watchlist. It might just solve so many untold problems between married or unmarried couples and if it can bring a change in perception of the male audience towards their wives/female partner then Thappad has won the battle already.