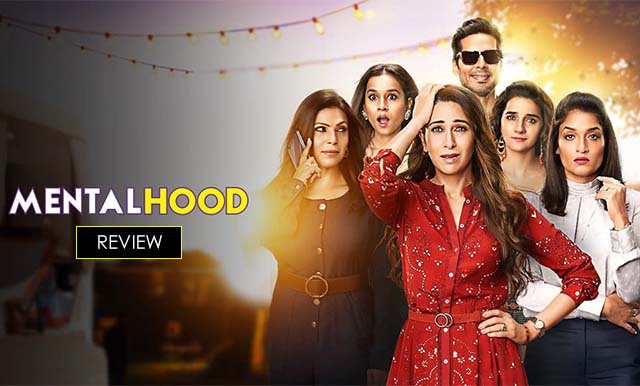 Parenthood aka motherhood is a blessing, is it really? A blessing can turn into hectic and so does Mentalhood. The rules of parenting have changed. Every mother has her own strategy and some have their own game, with only one aim – to be the best of the best. School life of children is one of those toughest periods in every parent’s life and kids don’t even realise it until they turn parents themselves. ZEE5 and AltBalaji collaborate to explore struggle and conflicts of parenthood in new web series titled “Mentalhood”

Karisma Kapoor returns on the screen with the bang. Obviously, this is not a silver screen but her impact felt till that level. Sandhya Mridul is outstanding as Ajo and you’ll find her character so dashing yet innocent. Tilotima Shome and Shruti Seth have done well in their roles of typical moms having problems with their husbands.

Shilpa Shukla is bold, strong and commendable throughout the series. Dino Morea is the only male Mom in this series manages to leave an impact through his conviction as a caring and responsible father. Sanjay Suri in the role of Karisma’s husband looks good. Child actors bring the innocent and naturality with their cute faces.

The success story of Mentalhood lies within its writing. It gets going so easily without daily life activities and we don’t even realise when it turns ugly and we start feeling bad. I myself never realised that my Mother had faced so many issues while I grew up. Now it’s time to acknowledge our parent’s hard work and thank them for doing so much for us. That’s where Mentalhood celebrates its victory.

Director Bhawna Rawail takes you to the different world of parenthood with the ease and convinces you to believe every small thing happening there. The on-screen showcase of parenthood would have never got better than this and the credit goes to producers and directors. Every single episode unfolds different chapter of Motherhood that we all experienced once but never recognised it as a problem.

Mentalhood doesn’t disappoint in any section of storytelling whether it is acting, writing, screenplay, music, production design and direction. Overall, Mentalhood is a blessing to watch. Motherhood explored like never before and most probably never again. This one deserves your take for your lovely parents.