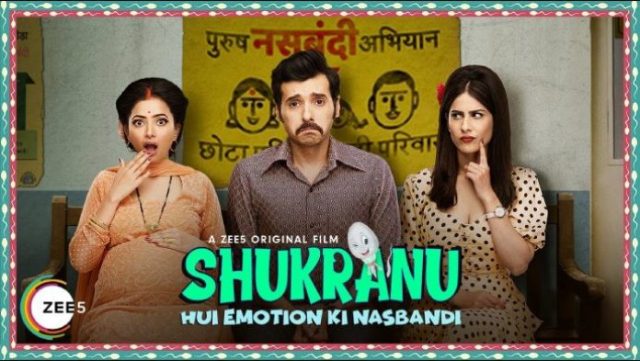 You must have seen the trailer by now, then you must have come to know the topic of Shukranu is very sensitive. This sensitive topic sounds little lusty and uncomfortable in the first hearing but when you acknowledge the deepness of it, you realise how important it is for the young generation. And when it comes to the storytelling in cinematic proportions there has to enough dose of entertainment otherwise people won’t really enjoy and connect to it. Shukranu thankfully has that perfect dose of entertainment and there is no way taking it down.

Set in Delhi/UP/Haryana, Shukranu is a comic take on the darkest phases of Indian democracy through the encounters of a would-be groom who is forcefully sterilized just days before his much-awaited marriage. The trailer itself spoils so many things of the script that there is nothing to hide or reveal.

The central character Inder (Divyendu Sharma) who marries to Reema (Shweta Basu Prasad) feels awkward to reveal about his vasectomy. When things are finally going good between Inder and Reema, Inder is shattered by the news of Reema being pregnant. Inder who is living with his best friend finds a new girlfriend Aakriti played by Sheetal Thakur to forget the humiliation of his wife’s pregnancy and then things turn totally chaos between these 3.

Talking about the performance in the movie, Divyendu Sharma does total justice to his character. Shweta Basu Prasad portrays a regular housewife with conviction and she also looks beautiful in local traditional attire. Exactly opposite to her, there is glamorous Sheetal Thakur who looks super hot. Aakash Dabhade as Inder’s friend is hilarious and his expressions were damn funny. Rest of the cast is supportive enough and make this chaos look real.

One of the major victorious factors in Shukranu is its screenplay which takes the storytelling on an interesting level. Whether it is the use of slapstick comedy or situational comedy, both works. It creates those laugh riot moments which we don’t really see on digital platforms. Director Bishnu Dev Halder hits a sixer on yorker. This sensitive topic was quite risky to handle and would have been spoiled if had not been taken care of.

The sensitivity of the subject has to be uncompromised and effective and the humour level was to be kept. Guess what, Shukranu ‘delivers’ both the things at the end. There is a predictable twist at the end and we might love to see a sequel. Overall, Shukranu is a sensitive topic told in an entertaining way and you gotta catch it on ZEE5. It’s not a must-watch kind of stuff but definitely fantastic one-time watchable product for 18+ audience.