After teasing fans for long, finally, the makers of India’s biggest action thriller Saaho have dropped its first look poster on social media on Tuesday. The poster features Baahubali actor Prabhas giving intense look to the camera through uber cool shades. As expected, this has created a solid buzz which one can feel in the air. 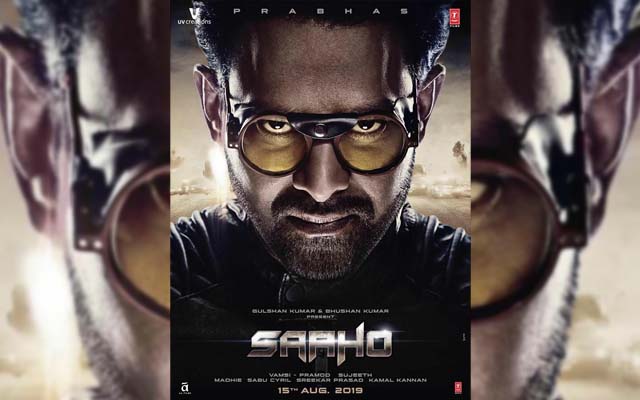 A day earlier, Prabhas made an announcement for his fans that he has a surprise for them from Saaho which will be revealed tomorrow i.e. on Tuesday. He posted a video on Instagram with a caption, ‘Hello darlings… A surprise coming your way, tomorrow. Stay tuned… #SaahoSurprise’.

As Prabhas promised, he took to Instagram on Tuesday and shared the first look poster of Saaho, ‘Here it is darlings, for all of you… The new official poster of my next film Saaho. See you in theatres on 15th August! #15AugWithSaaho’. The actor also made it confirmed, that his upcoming action thriller will be released on Independence Day as announced earlier.

John Abraham’s Batla House is also releasing on 15 August 2019, but as it is bankrolled by Bhushan Kumar who is co-producing Saaho, that means there will be no clash between these two. While Akshay Kumar’s Mission Mangal might get preponed by a week, which was also scheduled to be released on the same day.